I'm excited to announce v0.2.0, which brings two major features in addition to many small improvements and fixes. There are API-level changes that are potentially breaking changes. The CHANGELOG should help navigate through the changes necessary to update your projects.

One design decision that was made early in BonsaiDb's development was to use a u64 as the unique id/primary key for all documents. This was largely done to simplify the API, and I felt like it was reasonable that users could create an alternate key using a unique view.

I've attempted twice before to change it to allow customizing the primary key, but each time I ended up reverting the changes as I didn't like the impact to the API. However, this time I've succeeded in adding this API with minimal impact to the high-level API.

Our new example demonstrates how this feature can be used with the Collection derive macro:

The way this is implemented, any type that implements Key trait and isn't too large can be used as a primary key. The current size limitation is purely for optimization, and may be relaxed in the future.

More information about this feature can be found in our user guide.

A potential user was originally trying to diagnose why BonsaiDb was creating larger databases than Sled. After some troubleshooting, it was discovered that they had enabled the zstd feature in Sled, enabling automatic compression of data being stored.

This was a feature I had already planned on supporting, although my research had led me to believe that LZ4 was a better choice for an algorithm. Without doing comparative benchmarking personally, I decided to start with LZ4 compression and add zstd once namespaced features are released in Rust.

Some benchmarks have been updated to include compression for comparision. The results are interesting to look at, but no serious comparisons should be drawn yet. If you are under tight space constraints, this feature can save a lot of storage space while not impacting performance in a major way. 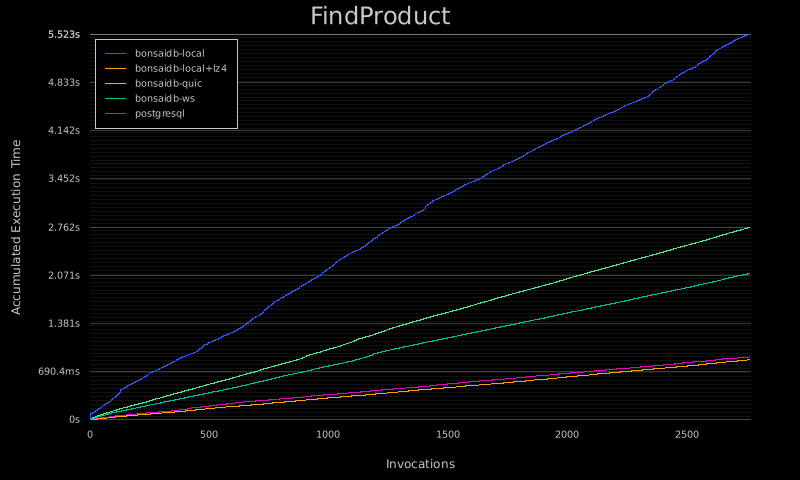 As you can see in this graph, the Commerce Benchmark sometimes shows improved performance over the uncompressed version. As always, performance will depend on your hardware and operating environment, which is why this is an opt-in feature.

The user who originally asked about this feature had reported that BonsaiDb's uncompressed database size a staggering 30x larger than the equivalent data in Sled. The next day they were able to test a branch with the feature enabled. The BonsaiDb database compressed with LZ4 shrunk to under half the size of their Sled database.