BonsaiDb v0.4.0 has been released with a new blocking (non-async) API, better identity/authentication session management, and many other improvements. The full list of changes can be viewed on the GitHub Release page.

For readers who enjoy the "This month in BonsaiDb" updates, this release announcement takes the place of that post this month.

This update contains no changes to how data is stored. However, there are a large number of types that have been renamed to distinguish async types from blocking types.

If you have an existing project and want to continue using async, here are the types that you need to find and replace with their async counterparts in your project:

If you are using the local version of BonsaiDb, Tokio has become an optional dependency. To enable async, enable the appropriate feature for whichever crate you're importing:

There are other small breaking changes which are unlikely to affect most users. The full list can be viewed in the CHANGELOG or release page.

For those it might help, I've updated an example project of mine from v0.2 to this new release. The changes can be viewed in this commit. This project features a client/server workspace and uses BonsaiDb's custom API functionality.

Why introduce a blocking API?

BonsaiDb has always wrapped Nebari's blocking API with tokio::task::spawn_blocking and exposed an async API. The reason behind this initial design was that the local-only version of BonsaiDb was a convenience feature, and the "real" benefit of projects adopting BonsaiDb was to use its server mode (and eventually clustering mode). I believe strongly that async is the best way to design a server that has long-lasting connections, and the types of applications I envision being developed with BonsaiDb fit that access model: Remote PubSub, Server-Push Apis, and more.

One day I was joking that a friend wouldn't want to use BonsaiDb for his project because it would force him to use async. While he proceeded to say that async wouldn't stop him, the exchange made me take stock of the current users of BonsaiDb. Of all the people who I know are using BonsaiDb, most were only using the local version and many weren't building networked applications.

Case in point, one user was painstakingly porting their project to async from sync to be able to use BonsaiDb. Thankfully, this set of changes were already underway, and they were able to be the first external tester of the new blocking API.

How does BonsaiDb enable both blocking and async access?

For the the local implementation, the most direct implementation is the blocking implementation. This means that there will be less overhead on local "connections" using the non-async interface. The overhead of the async types is very low, but it is present, and it is the same overhead that has always been present on BonsaiDb's interface.

The local implementation exposes Storage and Database, which implement StorageConnection and Connection respectively. These types are the blocking types. AsyncStorage and AsyncDatabase implement AsyncStorageConnection and AsyncConnection. These types are the async types that internally store a handle to the Tokio runtime they belong to. This grants these types the ability to spawn blocking tasks as needed, even when used in async code that is using another async runtime.

All local types offer several convenient functions that allow seamless conversion to and from each other, enabling applications that use both blocking and async to use BonsaiDb as their database with ease.

The server implementation currently only exposes an initialization API that is compatible with async code. Once the server is initialized, however, a Server/CustomServer instance can be converted to Storage, enabling blocking access to the underlying storage layer.

Prior to this release, there was no way to enforce database permissions in the offline version of BonsaiDb. If you are building a multi-user app but are using your own web server, how are you supposed to be able to leverage BonsaiDb's permissions and authentication?

This release addresses this problem by moving all permission checking into the offline version and adding assume_identity() to StorageConnection/AsyncStorageConnection. Assuming an identity requires the permission to be allowed by the current connection. These changes allow all applications that need multi-user support to use the built-in role-based access control and, optionally, the built-in password authentication.

Each connection object now has an associated Session, available through the new HasSession trait. The functions assume_identity() and authenticate() return a new instance that is authenticated with the updated identity and associated permissions. The original connection retains its original authentication. This allows multiple authentication sessions to coexist on the same underlying connection, regardless of if it's a local or remote connection.

The Key trait has been split into two traits: Key and KeyEncoding. This split has enabled various queries to take borrowed representations of the keys. For example, a String key type can now be queried using an &str:

Additional types now have Key implementations provided for them: [u8; N], SystemTime and Duration.

Using Time as a Key

Both SystemTime and Duration are stored with the full range that Duration supports. In memory, these types require 12 bytes to represent, and even with variable integer encoding, the values encoded as keys can still be fairly long.

Most users don't need nanosecond precision with the range of 42 times the age of the universe. After a fun coworking session on our Discord server, I introduced LimitedResolutionDuration and LimitedResolutionTimestamp. These types allow representing durations and timestamps using smaller in-memory representations, and offer additional compression using variable integer encoding and customizable epochs.

To see an example of the benefits, compare timestamps encoded over the span of the next 40 years and their Key-encoded lengths: 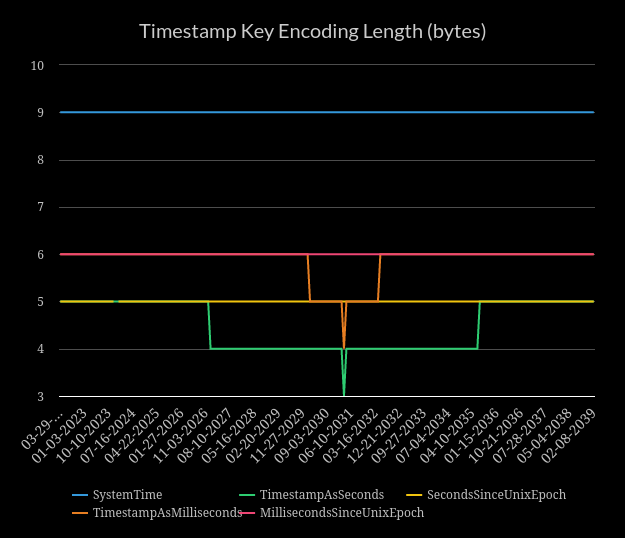 As you can see, SystemTime encodes as 9 bytes (and will continue to do so until year 10,680). SystemTime's Key implementation encodes the duration from the unix epoch, so this means that Durations that of 52 years with nanosecond precision take 9 bytes to encode. The smaller the Duration being encoded, the smaller the output will be.

How can we compress timestamps further? By leveraging an Epoch that is closer to the median of the expected timestamp/duration range, we can allow the variable integer encoding to shine. The closer to the Epoch the timestamp is, the smaller the value is.

In the above chart, the two values that dip in the middle use BonsaiEpoch. After considering that databases either live long enough to be used for almost an eternity (PostgreSQL was first released in the 1980s) or live a short life. I thought the 10-year anniversary of the first commit of BonsaiDb seemed like a good idea.

Despite it being an arbitrary decision, further consideration showed that epoch is good for one reason: Nanosecond-resolution timestamps encoded today will encode as 8 bytes, and will continue doing so until year 2,049. If an epoch slightly farther out were chosen, today's timestamps would encode with a full 9 bytes, offering no benefit over the unix epoch version. This extra byte of savings isn't much, but it does make the key size word size or less on most modern machines.

Other contributors this release

I wanted to make sure to include a mention for @vbmade2000's contributions to this release. They added the ability to delete users, and the ability to retrieve a list of document headers without fetching the document's contents.

If you are interested in contributing to BonsaiDb, I am trying to keep a healthy list of good first issues.