First, a Thank You

My last post covered how a couple of small but impactful mistakes severely impacted BonsaiDb's performance. The numerous supportive messages and comments I received was truly humbling. Thank you everyone who took the time to reach out in any way.

I had two goals with that post: to let anyone using or considering BonsaiDb know of the issue, and to reassure any users or potential users that I was confident in improving BonsaiDb's performance.

At the time of writing that post, my ideas on how to improve performance were half-formed, and I didn't have any confidence in what sort of speedups I could achieve. I was excited to experiment, but I wasn't ready to share my thoughts.

There are two things that have helped me gain enough confidence to start sharing what I've been working on: the numerous heartwarming messages and comments, and making meaningful progress in testing my ideas.

Today's post covers how I've improved Nebari's transaction batching to be able to achieve a higher number of transactions per second. I will then follow up by discussing how a new format for Nebari might be able to close the remaining performance gap between BonsaiDb and PostgreSQL.

The goal of improving batching

Let's see what happens when these threads all try to modify the same tree instead (a):

Thread 1 acquires the lock on tree a, causing the other two threads to wait until its released. This doesn't happen in Nebari today until the transaction is fully confirmed. This is the problem that the Commerce Benchmark is BonsaiDb was exhibiting: transactions would cause backlogs to form until most workers were blocked waiting on other transactions to complete -- often serially.

What if we could enable this sort of pipelining:

The above sequence of operations still only allows each thread access to the tree for writing one at a time, perserving Nebari's current single-writer philosophy. The transactional guarantees are still the same: no transaction is confirmed complete until it is fully synchronized. The change is in how Nebari is keeping track of the tree states.

This subtle change allows a second transaction to acquire the lock and update the Write state. It too will clone the state and release the tree. If this happened more quickly than the first transaction took to synchronize, even more transactions may proceed and be batched. The only edge case to worry about is that an older state being published should not be able to overwrite a newer state.

I set out on Sunday afternoon to try this new approach.

Yesterday just in time for my lunch break, I reached a point where I could benchmark my new transaction batching code. I am running a specific profile of the Commerce Benchmark using 16 worker agents, which means the database is trying to process requests from 16 threads simultaneously.

BonsaiDb v0.4.1 takes ~23 seconds to complete the benchmark. After these changes, it now takes just shy of 3 seconds. This is clearly a huge win. However, PostgreSQL still takes less than half the time, so there's still room for improvement. For those who are curious to dive in beyond the summary, I've uploaded the benchmark report of the new approach.

I compared the timeline view of profiling data in Hotspot: 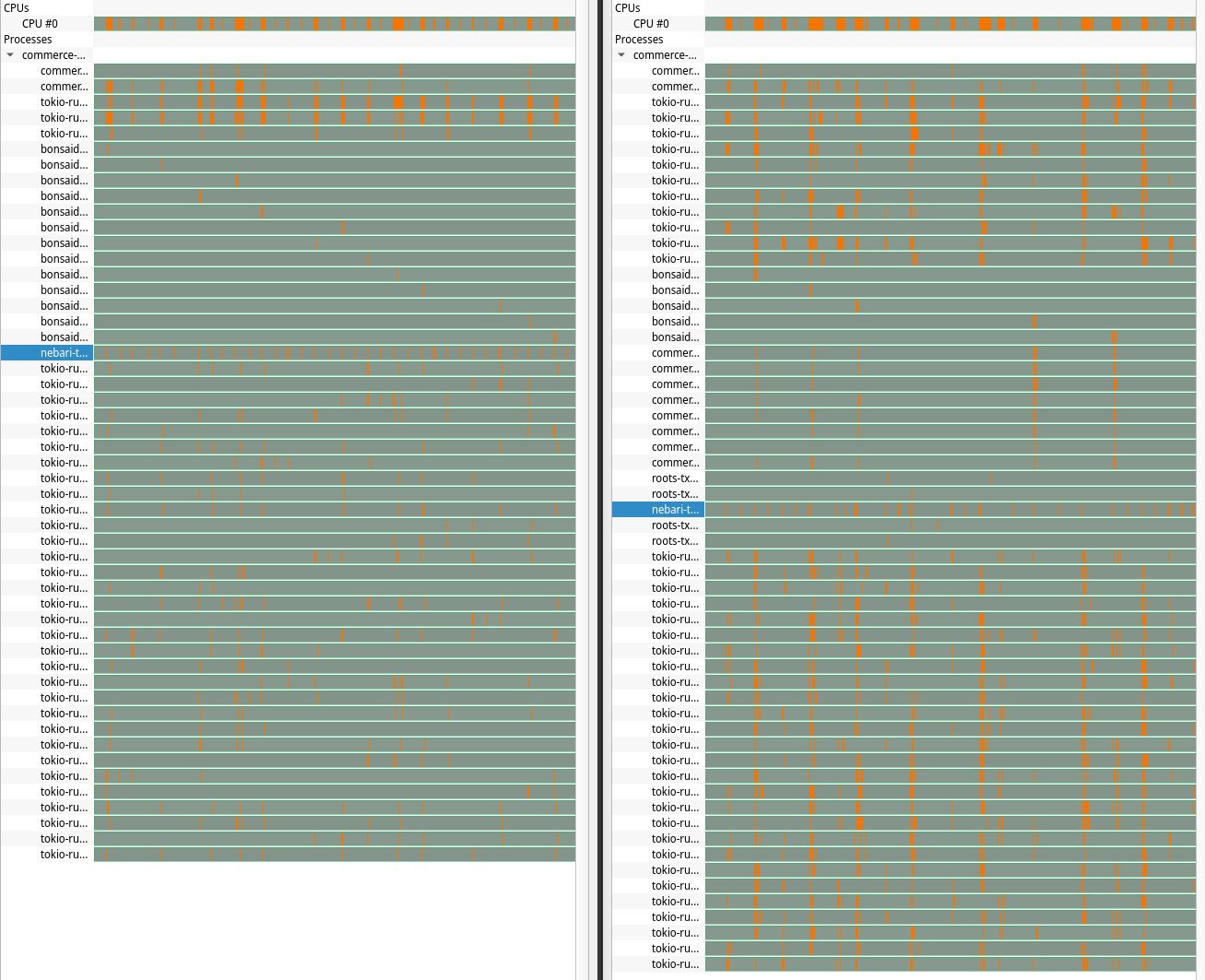 I recognize this image might be hard to read on mobile devices. Clicking the image will allow you to see it at full resolution. Both timelines are zoomed in to show 100ms of activity. On the left is BonsaiDb v0.4.1 and on the right is the updated code.

The orange colored parts are where CPU samples were taken. The green areas are where those threads have no samples -- they were blocked. It's clear at a quick glance that there are a lot more orange areas on the right side, which is what we'd expect given the higher throughput.

The other observation to note is the transaction log's thread activity. Theoretically, that thread's activity should be roughtly the same, as it was and still will be bottlenecked by file flushing. The thread that is highlighted blue is the transaction log thread. While there is variation between the graphs, the amount of activity and the space between them is roughly the same on average. That is exactly what I was expecting to see.

Now, Nebari is bottlenecked by the frequency of flushes, and the Commerce Benchmark is reaching its performance limit due to only having a fixed number of worker agents. Once all agents are waiting on a transaction, everything is blocked until the next batch is committed.

This is why the transaction log requires that all trees are fully flushed before being written itself. If the log format were changed, we could add a list of committed trees to each entry. This would be all that's needed to allow Nebari to perform a single flush per transaction batch, which should nearly double the throughput with the current design. However, I suspect that wouldn't be enough to fully match PostgreSQL's performance.

PostgreSQL, as well as many other database engines, pre-allocate chunks of storage rather than appending to the end of the file for each write. Additionally, when data is freed, other engines will often reuse that space. In the previous blog post, I included some results from a benchmark showing how preallocating can drastically reduce overall write times.

Converting Nebari into a format that can preallocate yet still remain append-only is one approach, but I'm not certain it's worth the effort. Because the above changes necessitate a format upgrade, I feel like my best option would be to re-evaluate my options for how Nebari works to try to achieve the best results.

Despite Nebari being designed as an append-only format, the majority of the code base interacts with the file using two functions: read_chunk() and write_chunk().

write_chunk() writes a series of bytes to the file and returns a u64. This number is the offset into the file that the data is stored at, but all of the B+Tree code treats this number as an opaque ID. The only way it is used is with subsequent calls to read_chunk().

Because this abstraction exists, it seems pretty clear that the new format's API should look something like:

My overall goals of this new underlying storage layer would be:

If such a format could be built, it would be a fairly trivial operation to port Nebari to it.

Sediment: A new foundation for Nebari

Sediment is my mostly-still-theorized file format that is aimed at providing the API and goals outlined above.

Sediment will use a single-file architecture that allows storing blobs of data with ACID compliance. Each stored blob is assigned a GrainId which can be used to retrieve the data or release the data in the future.

Sediment follows my neverending need to name things in cute but meaningful ways. The file is organized into a hierarchy of Basins, Stratum, and Grains. A GrainId identifies which grain inside of which stratum inside of which basin the data is stored.

Nearly ever header stored in the file will be stored twice. When a new set of updates are being written, new data only touches the outdated copy. There are multiple validations that can happen to ensure that each page touched by a commit was flushed. This design is how Sediment will be able to use a single flush operation to persist a batch of writes to disk.

Once a GrainId has data, it is immutable. The only two operations that can be performed on a GrainId are: get and archive.

Archiving a grain will prepare the grain to be reused. Grains are not immediately freed, however. Instead, Sediment assigns each commit a SequenceId. Sediment supports a built-in log that could be used to power a replication log. To ensure data is not overwritten before a consumer of the log, Sediment will allow the user to checkpoint the log to a specific SequenceId.

Once the SequenceId of a given archive operation has been checkpointed, the GrainIds will be marked as free and be able to be reused.

Will this make BonsaiDb fast again?

I don't expect the result of this to be that BonsaiDb is suddenly faster than PostgreSQL. The reason is simple: when I first saw the benchmark results in January, it took me a very long time convincing myself the PostgreSQL numbers were correct before I allowed myself to get excited.

I had never heard that PostgreSQL is slow -- quite the contrary. From my understanding, if your workload is properly optimized, it's actually a very performant database. I know there are ideas on how to improve its performance, but overall, performance is not usually not people's main complaint with PostgreSQL and performance is continually improving with each release.

I'm not going to be able to achieve anywhere near the numbers reported in January -- they were based on truly flawed processes and methodology. But, I'm hopeful I can get close enough to other ACID-compliant database engines that most users shouldn't have issues with BonsaiDb's performance moving forward.

Why not ship what I have?

The problem with the current set of changes is that they are a complete format change from v0.4.1. While Nebari's format hasn't changed today, BonsaiDb is now using Nebari completely differently. This means that I need to design an upgrade process to migrate the file format.

With my confidence level gaining in my new format's design, I am not very tempted to subject users to two format upgrades. While this decision means that these performance updates will take longer to get into users hands, it means less legacy code for me to support during the alpha period. At this stage in BonsaiDb's development, I have to prioritize maintainability.

While it would have been nice to have been able to work on other features the last few weeks, I'm truly excited by the prospect of this new format. One of the biggest gotchas of benchmarking BonsaiDb (before the recent issues) was the caveat that a "compact" operation had to be performed to reclaim disk space.

With this new format, there will no longer be that caveat. There will still be maintenance tasks that can be performed to try to optimize storage, but they will be optional and shouldn't be necessary in normal operation.

I'm simultaneously relieved and excited that I should be able to stick with Nebari. The changes in my pending view and document storage rewrite enable some really cool features:

Nebari's ability to embed your own indexes in the B+Tree nodes and create custom tree roots make it a unique low-level database offering.

This post and the last post provide a good summary of what I've been up to for the past month, so I'm skipping a "This Month in BonsaiDb" post for May. If I don't have any news before the end of June rolls around, I'll make sure to write an update covering my progress.

In the meantime, if you'd like to try the current alpha of BonsaiDb, the homepage has basic setup instructions and a list of examples. I have started writing a user's guide, but I think the documentation is in a better state at the moment.

Thank you again to everyone who took the time to write a note after last week's blog post. I'm thankful to be part of such a supportive community.